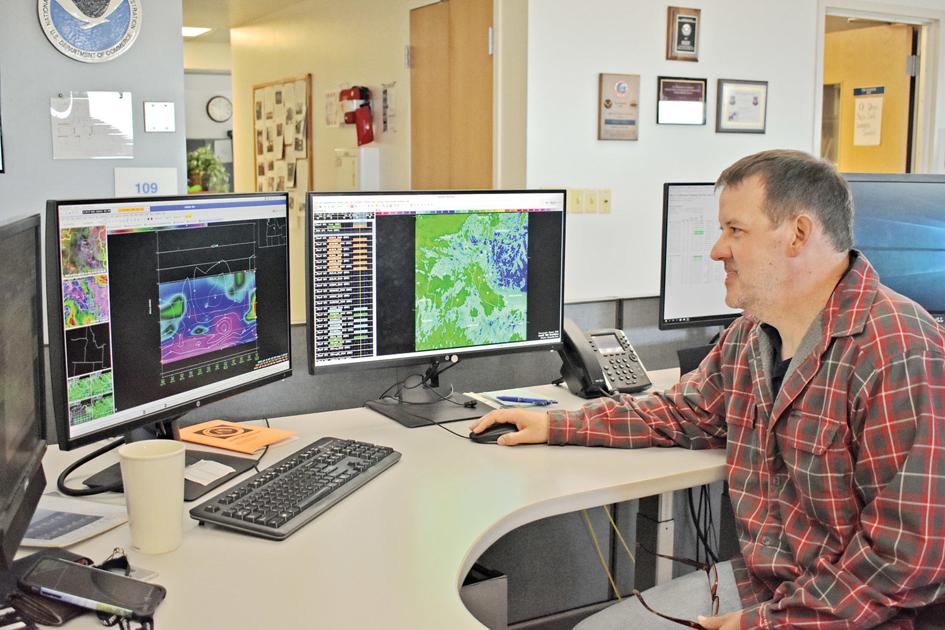 BAKER CITY — The people who tell us whether it’s likely to rain tomorrow rely on satellites 22,000 miles above the Earth and on balloons that aren’t so different from what you might use to decorate a toddler’s birthday party.

This combination of advanced and basic technology reflects the inherent complexity of the atmosphere, said Jay Breidenbach, warning coordination meteorologist at the National Weather Service Office in Boise.

The federal government’s newest weather satellite, which started transmitting its detailed images of clouds and other phenomena in 2018, is a vital tool for forecasters, Breidenbach said.

“It’s a quantum leap forward in terms of what we can observe from space,” he said of the data supplied by the GOES-West satellite, the second of four satellites the federal government plans to put into orbit.

The National Oceanic and Atmospheric Administration, the federal department of which the National Weather Service is a part, will spend about $11 billion to launch the quartet of weather satellites (GOES is an acronym for Geostationary Operational Environmental Satellite. Geostationary refers to the orbit, which is stationary so the satellite sees the same part of the Earth, and its atmosphere, all the time.)

But although these satellites can track a storm forming in the Pacific Ocean several days before it drops 6 inches of snow in Northeast Oregon, they might not detect a local temperature inversion that has a significant effect on the weather in an area as small as Baker Valley.

That’s why employees at the NWS office near the Boise Airport twice a day launch a hydrogen-filled balloon that lifts weather sensors about 100,000 feet.

As the balloon rises, the sensors record and relay to the NWS office temperature, humidity, wind speed and direction and other data that help meteorologists fine-tune forecasts, Breidenbach said.

The balloons yield what Breidenbach describes as an extremely detailed “vertical profile” snapshot of the atmosphere — something that much more sophisticated devices, such as orbiting satellites and Doppler weather radar, can’t deliver.

The balloons determine, among other things, the freezing level, which affects at which elevation snow will fall.

Doppler radar is one of the most advanced ground-based technologies the Weather Service employs to scrutinize the atmosphere.

The radar, which is enclosed in a bright white building that resembles nothing so much as a giant puffball mushroom, sends out a radar beam that detects rain and snow and wind direction (based on whether air is moving toward or away from the radar station).

Doppler radar, which the NWS installed near the Boise Airport in the early 1990s, is the reason that an office in Idaho tracks weather in, and issues daily forecasts for, a large chunk of Eastern Oregon, Breidenbach said.

The Boise Doppler station, which is about 5 miles south of the airport, has a much better “view” of Baker, Malheur and Harney counties than does the nearest other radar, at the Eastern Oregon Regional Airport in Pendleton.

The Boise Doppler’s insight into Baker County isn’t without blind spots, however.

Breidenbach said because the radar beam has to be angled upward to clear high ground between Boise and Baker City, it sometimes overshoots, as it were, the relatively low clouds that sometimes drop rain or snow. The result is the radar map might show little or no precipitation in and around Baker City even when snowflakes are falling.

Another limitation has to do with thunderstorms.

The 9,700-foot bulk of Steens Mountain, south of Burns, forms a formidable radar blockage from Boise of the high desert areas that spawn many summer storms, Breidenbach said.

By the time thunderheads are either tall enough that the radar can “see” them, or the cells have moved north and beyond the obstacle of Steens Mountain, they’re often just a few hours from arriving in the Baker City area, he said.

The Boise office is one of 122 in the National Weather Service’s nationwide network of forecast offices. Each office’s area of responsibility is based in part on its Doppler radar coverage, Breidenbach said.

There are just two forecast offices in Idaho — Boise and Pocatello.

Boise, in addition to covering Baker, Malheur and Harney counties in Oregon, issues forecasts, warnings and other information for most of the western and southern sections of Idaho.

Pendleton oversees the parts of Northeastern Oregon that Boise does not, including Union, Wallowa, Grant and Umatilla counties, as well as much of Central Oregon extending west to the Oregon Cascades.

The Boise office’s staff of about 24 includes five lead forecasters and seven general forecasters, as well as administrative and technical support staff, the latter responsible for maintaining the Doppler radar and the office’s network of computers and other equipment.

The forecasters’ work stations are dominated by computer monitors. Some display images familiar to anyone who has watched a TV station’s weather report — scrolling sequences of white clouds depicted on a black backdrop.

But others are festooned with multiple lines, in a palette of colors, that are all but inexplicable to the layperson.

The office is quiet, save for the low hum of computer fans and the occasional clack of fingers tapping a keyboard.

Chuck Redman, the Boise office’s fire weather forecaster, wears jeans and a plaid shirt. From his desk chair he can survey three monitors in his cubicle, as well as two big-screen versions on a nearby wall.

With a click of his computer mouse Redman can survey current weather — gathered at ground stations, such as the Baker City Airport, as well as data from the upper atmosphere collected by the satellites — as well as sample any of the several computer-generated models that are an integral ingredient in concocting the forecasts the office issues daily.

One of his monitors is configured to show four models simultaneously.

These models are one reason the NWS is a major user of some of the world’s most powerful supercomputers, Breidenbach said.

Those computers are at the National Oceanic and Atmospheric Administration headquarters in Silver Springs, Maryland. Only the fastest computers — ones that are to your laptop what a Saturn 5 rocket is to a family car — are capable of digesting the billions of pieces of data that at any instant make up the conditions in the atmosphere.

Think of it this way — to predict with anything resembling accuracy the weather conditions for a given point on the planet’s surface tomorrow, much less a week from today, the models must take into account various conditions, such as temperature, humidity and wind, from the surface up to more than 50,000 feet altitude, and over areas measuring in the hundreds of thousands of square miles.

The “latest and greatest” development in modeling is the “ensemble,” he said.

The basic idea is to run a set of models as much as 100 times, each time starting with slightly different conditions or different versions of the models. This helps to account for the inherent instability in the atmosphere and gives forecasters a wider range of potential future conditions to consider, Breidenbach said.

Ensembles have a major influence on how confident forecasters are in their predictions, and that in turn affects how specific those forecasts are — the difference, say, between calling for 3-5 inches of snow or a more hedging prediction of 2-8 inches.

Redman said forecasters’ confidence on details, such as temperatures and the likelihood of precipitation, depends largely on consistency among the models.

In some cases each model, including the ensembles, will depict a similar, or even basically identical, weather pattern — all will predict a storm arriving in Baker County on a particular day, for instance.

“We tend to be more confident in the forecast if all the models show the same thing and they’ve been consistent over several days,” Breidenbach said.

But at other times there can be significant differences among models, he said — occasionally even to the point that one model predicts fair weather while another portends foul.

The level of forecasters’ confidence based on models doesn’t show up in the public forecasts that NWS offices post on their websites, at least not explicitly.

To get something closer to an insider’s view you need to read the “forecast discussion,” which is also publicly available under the “forecast” tab on NWS websites, if not as widely read as the forecasts themselves.

These discussions, which generally run a few hundred words and are issued four times each day, are written by forecasters and go into some detail about the factors, including consistency or lack thereof among models, that went into making the forecast.

Breidenbach chuckles as he admits he reads the forecast discussion from the Boise office even when he’s at home.

“We all kind of love the weather,” he said.

Computer models have improved steadily over the past couple decades, Breidenbach said.

That’s due in part to technology, such as the GOES satellites, which vastly increase the amount of data the supercomputers chew on before spitting out their predictions.

The accuracy of models has increased so much that NWS forecasts, which are graded much like a student’s homework, are as accurate out to five days as they were out to three days just a decade ago, Breidenbach said.

The models are adept at tracking large-scale features, such as the storms that form every winter in the Pacific Ocean — a tempest that sprawls over thousands of square miles is tough to miss from a vantage point 22,000 miles up.

To cite a recent example, Breidenbach said all the models agreed that a series of storms would bring copious amounts of snow to the mountains of Eastern Oregon and Western Idaho in mid-January.

And as skiers and snowplow drivers can attest, that’s what happened.

But when it comes to the details, Breidenbach said some models tend to have, in effect, biases — one will consistently forecast more rain or snow than what actually falls, for instance.

This can of course be crucial — whether 1 inch of snow falls, or 6 inches, can determine whether or not freeways close.

Over time, NWS forecasters recognize these tendencies, and they factor these into their forecasts rather than relying solely on the models, he said.

(This matter of humans overriding the computers is even more critical when it comes to forecasting weather in regions, such as Baker County, where topography can have major effects. See the Feb. 4 issue for a more thorough look at that topic.)

On the morning of Jan. 22 at the Boise office, Breidenbach illustrated how forecasters use models as a guide only.

He pointed to one of Redman’s monitors, where a model predicted a high temperature the next day of 44 degrees in Baker City.

Breidenbach and Redman said forecasters who issue the public forecast would likely trim a few degrees because they knew there was snow on the ground in Baker City. Since snow reflects rather than absorbs much of the sun’s heat, a factor the models don’t always acknowledge, model guidance for temperatures can be too high when snow is present.

Indeed, the high temperature at the Baker City Airport on Jan. 23 was 41 degrees.

Breidenbach said although he’s confident that forecast models will continue to improve, he’s equally certain the NWS will need meteorologists, and in particular their institutional knowledge of local conditions, to ensure forecasts are as accurate as possible.

Looking back: The 2010s in technology - Business Leader

Mini-LED vs QLED TV: How one technology is improving the other – Digital Trends