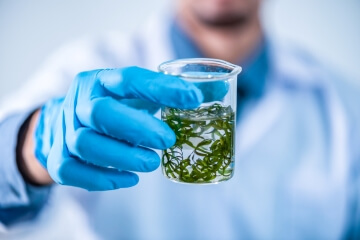 Green technology isn’t new per se. But it’s certainly on the rise with growing concerns about climate change. Algae notably plays a crucial role in green tech, sometimes quite literally since many algae are, well, green in colour. Learn more about algae and its use in green technology!

You’ve probably heard of algae, and most likely seen it naturally occurring. It’s an aquatic photosynthetic organism. Common forms of algae include seaweed like kelp, pond scum, and lake-dwelling algal blooms. Although some algae is green in colour, there’s also blue-green algae, red algae from which the term crimson tide derives (as in the excellent Denzel Washington), and brown algae.

How is Algae used in Green Technology?

Certain algae may be harmful, such as toxic blue-green algae, or red tide. But algae may be used for a variety of green tech purposes.

Algae, it turns out, is an incredibly efficient method of natural carbon capture. Hypergiant Industries debuted the Eos Bioreactor prototype that pairs artificial intelligence (AI) with algae for a device that carbon reduction. Similarly, Helios-NRG seeks to further this trend of carbon sequestration using algae. Using tanks of microalgae, Helios-NRG aims to both increase algal production while lowering carbon emissions.

Yet, using algae as a means of carbon sequestration, therefore, increases algal growth. Enter biofuels. Algal biofuel is a hot trend. It’s not as commercially feasible as the industry-standard petroleum fuel. Still, algae-based biofuel boasts several benefits. For one, algae production is possible on land otherwise unsuitable for crop growth, a differentiating feature when compared to biofuel such as ethanol. In fact, algal growth remains feasible in traditional settings such as lakes, ponds, and oceans as well as closed-loop systems. Moreover, biofuel returns are higher than competing biofuels.

Therefore, pairing algal carbon capture with the ability to produce biofuel from excess algae growth provides a sustainable means of both reducing carbon emissions as well as generating a usable form of fuel. In theory, it’s a scalable, carbon-free technology.

Algae is poised to truly revolutionize several sectors. It excels as a method for carbon sequestration. And its potential as a biofuel means tons of usefulness. Still, much research is needed to determine the long-term sustainability of algae as both a means of carbon capture and as a biofuel.

Co-founder of the darknet platform Fraudsters in court