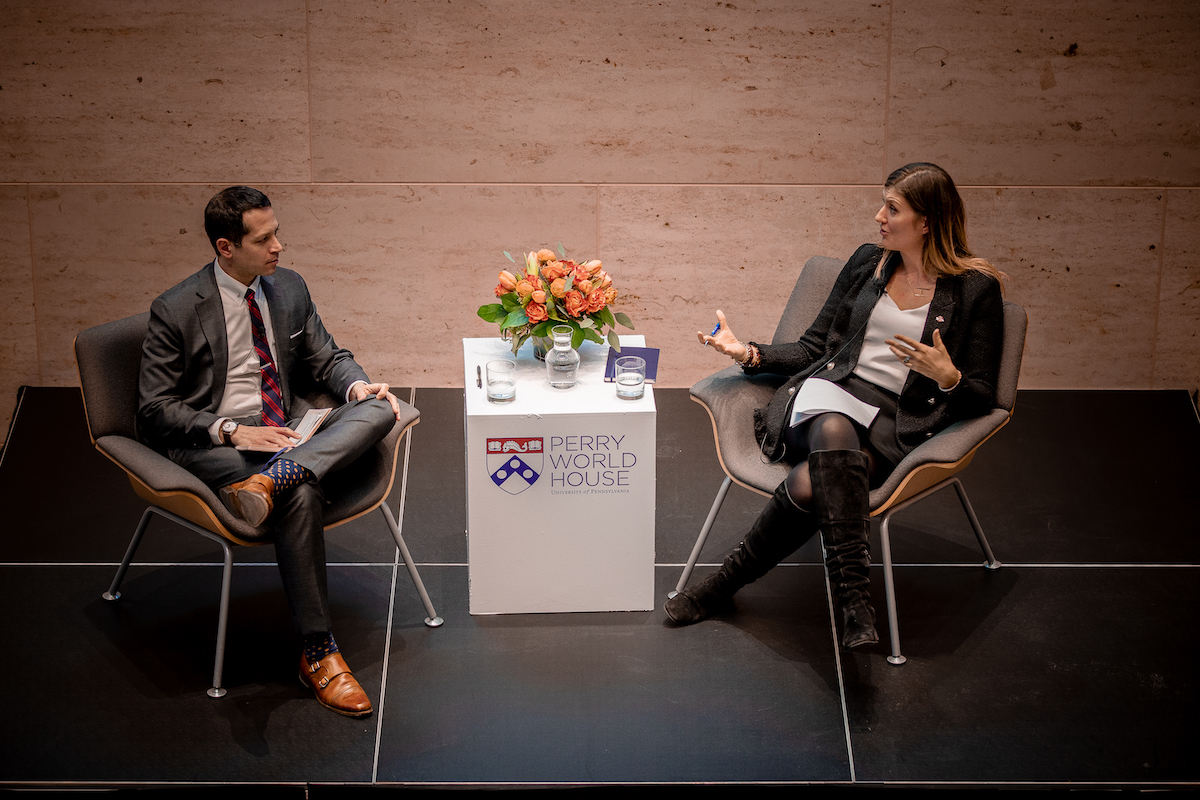 Emerging technologies like artificial intelligence increase the risk that nuclear-armed states will use those weapons, said Beatrice Fihn, executive director of the International Campaign to Abolish Nuclear Weapons.

The only way to prevent that from happening, she contends, is to eliminate nuclear weapons entirely.

“The risk has always been there, and we are going on 75 years of being really, really lucky,” said Fihn. “But based on our technologies, we’ll run out of luck and if we keep nuclear weapons forever they will, at some point, be used.”

Fihn, a Swedish lawyer who in 2017 accepted the Nobel Peace Prize on behalf of the Campaign, shared her thoughts on abolishing nuclear weapons in this age of artificial intelligence during a talk at Perry World House (PWH), moderated by Michael C. Horowitz, PWH interim director.

The conversation was part of her weeklong visit to campus as a Distinguished Visiting Fellow at PWH. Other events in the week included meeting with undergraduate and graduate students, lectures at Penn Law and the political science department in the School of Arts and Sciences, and participating in a podcast.

Fihn was introduced by Provost Wendell Pritchett, who joked that she “knows more about technology and the dangers of nuclear proliferation than even Sarah Connor,” the protagonist in the “Terminator” movie franchise. 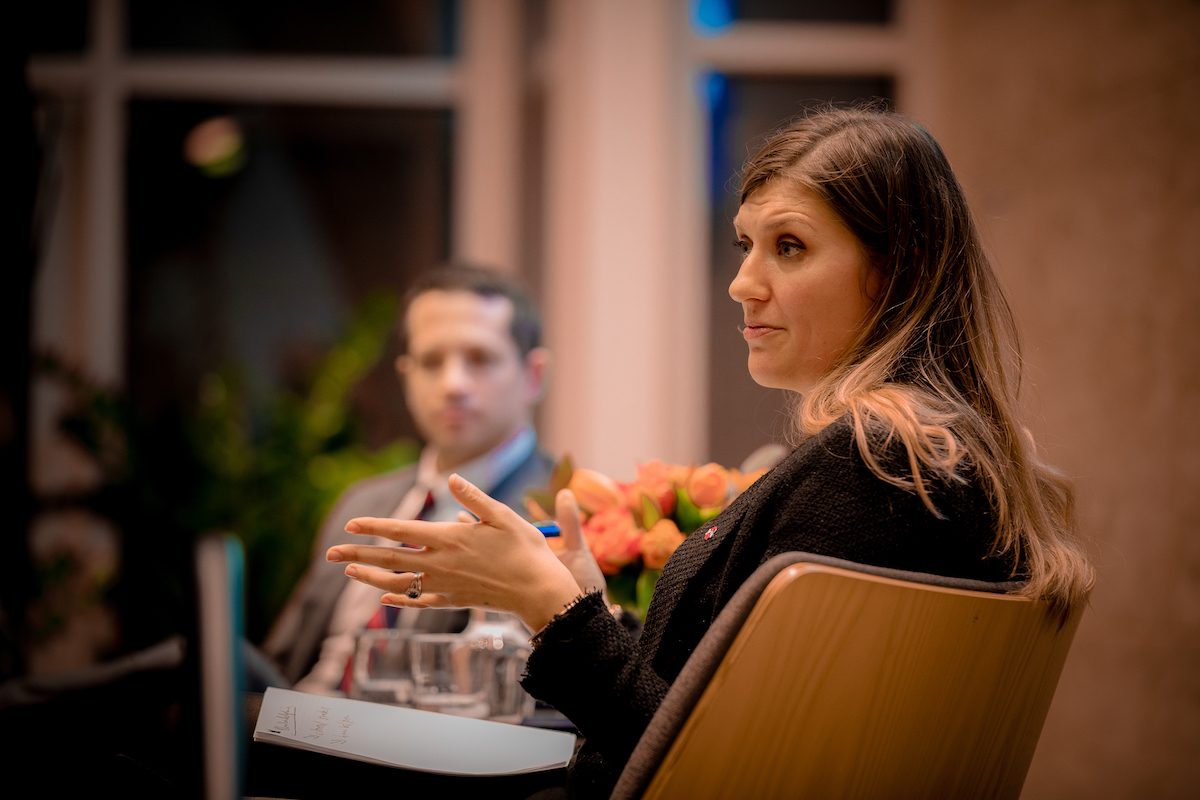 Beatrice Fihn responds to a question at Perry World House.

Ever since the advent of nuclear weapons, there have been close calls, accidents, and misunderstandings, Fihn said, pointing to the Cuban missile crisis, two nuclear bombs being accidentally dropped on North Carolina in 1961 (but failing to detonate), and the 1983 case of Stanislav Petrov, who became known as “The Man Who Saved the World.” Petrov broke with Soviet protocol and didn’t launch a nuclear attack when his system erroneously detected United States missiles were en route. He thought it seemed wrong, and he waited. He was right, the system made an error, and no U.S. bombs arrived.

But as technology has changed, so has the risk of nuclear use, Fihn said. That’s compounded by increasing global tensions and “some irrational leaders in charge of nuclear weapons right now,” Fihn said.

Examples of how emerging technologies increase the risk of nuclear use include offensive cyber technology, like data manipulation and cyber spoofing, and the increased uncertainties it can introduce in decision making; increased applications of machine learning in military operations; increased speed of warfare, bringing a shorter period of time for decision makers to choose whether to launch nuclear weapons; and efforts to develop killer robots.

“There is a real concern about outsourcing decision-making to machines,” she said. “Would the machine version of Stanislav Petrov wait?”

The evening wasn’t all end-of-the-world doom and gloom, though.

Fihn pointed out that only nine countries in the world have nuclear weapons, and she discussed the Treaty on the Prohibition of Nuclear Weapons, which more than 120 governments at the United Nations adopted in 2017.

“Most countries in the world do not believe that nuclear weapons are a solution to their security problems, they do not believe they are legitimate weapons to have or possess, and they are not interested in developing them. That’s really good,” she said. 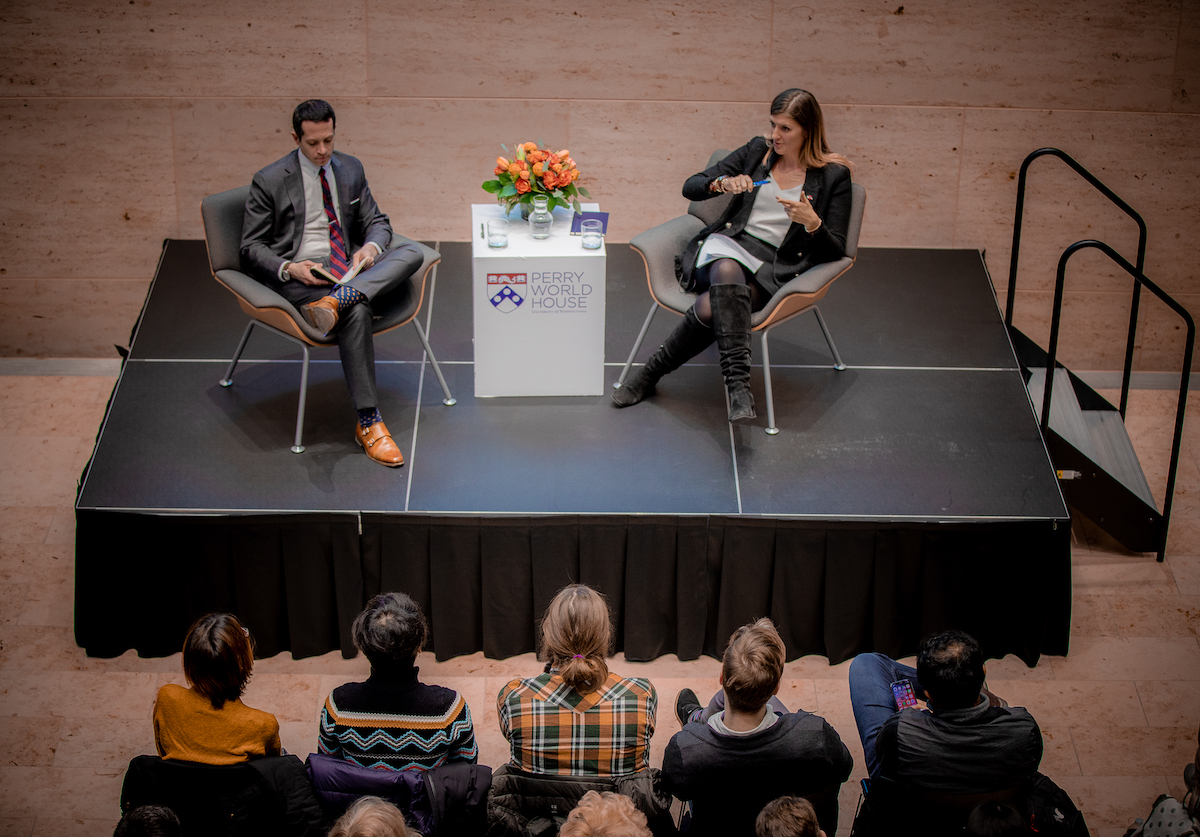 The Treaty on the Prohibition of Nuclear Weapons is the first agreement that completely bans nuclear weapons, and, step by step, governments are starting to join it, she said. Right now, 80 governments have signed the treaty, and 35 have ratified it. Fifty countries must ratify it before it becomes international law, declaring such weapons are banned.

She said that will enable activists to start pressuring the governments that are in the nuclear alliance agreement, as a way to introduce unacceptability.

“We wouldn’t accept our world leaders threatening to use chemical weapons; that’s been banned. So, we should start thinking the same way about nuclear weapons,” she said.

Every country that signs the treaty chips away at the legitimacy of nuclear weapons, undermining the status they have, she said.

“There is very little practical use of nuclear weapons. They’re kind of clumsy, they’re not great in a military operation, they are actually not that useful,” Fihn said. “They are symbols of power. And when people start rejecting that and don’t see that as power but as shameful, as something inhuman, unethical, it loses that power. And what do you have left? Quite expensive radioactive bombs. Maybe we should not have them then.”

All photos by Simmi Mourya.

How to Invest in 5G Internet Technology – Yahoo Finance

New technology lets you control your TV with your eyes only – KOAA.com Colorado Springs and Pueblo News