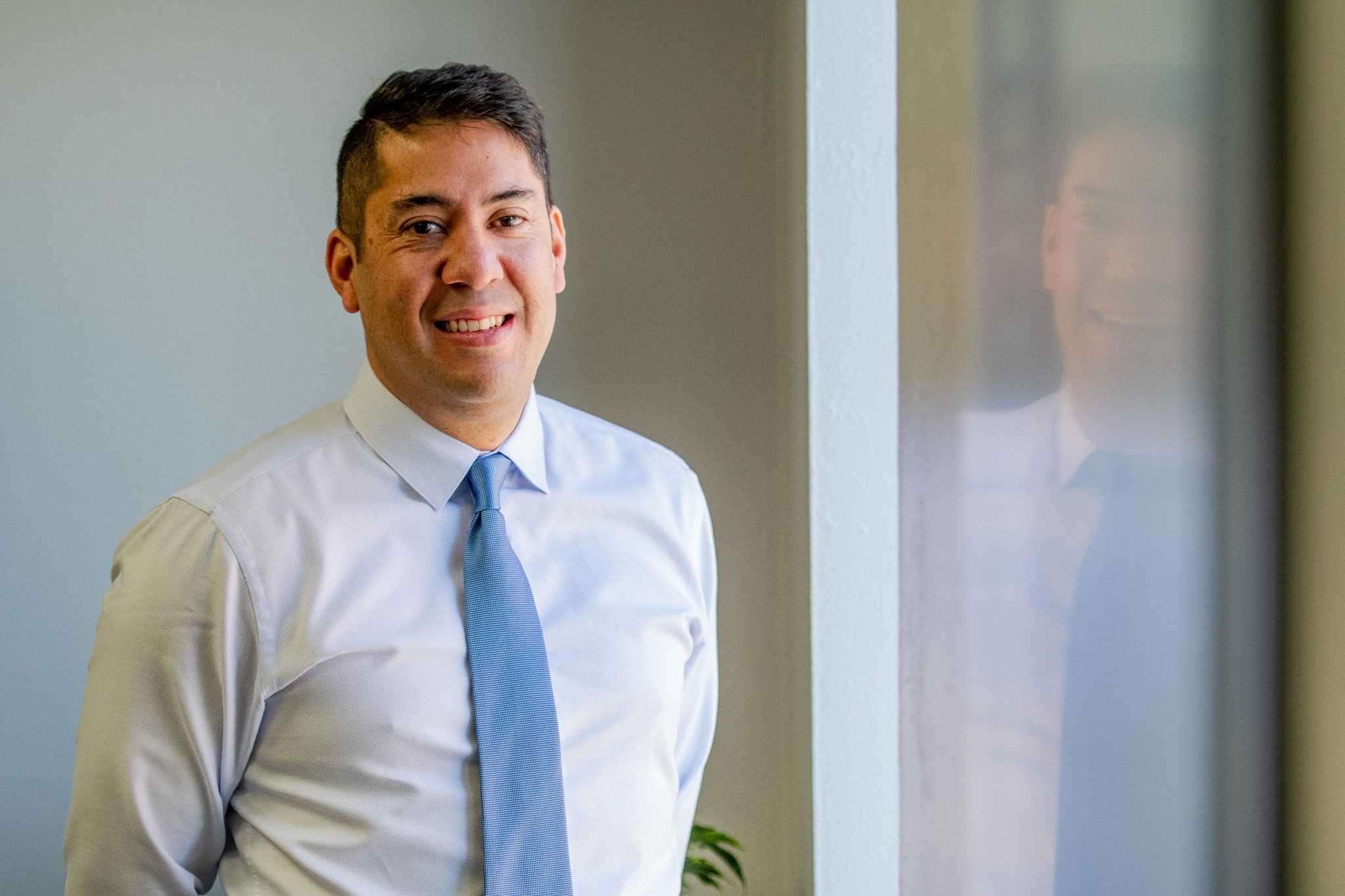 Gradiant Energy Services CEO Danny Jimenez wants to change how the oil and natural gas industry handles the hundreds of millions of gallons of wastewater being produced each day.

Headquartered in Denver but with offices in Houston and Midland, the company’s technology allows oil and natural gas companies to clean and reuse the treated water employed in drilling and hydraulic fracturing operations rather than injecting it underground at disposal sites known as saltwater disposal wells.

Gradiant’s latest offering takes a radically different and potentially industry-disruptive approach. The company’s Carrier Gas Concentration, or CGC, technology receives wastewater and filters out oil, natural gas, chemicals and other contaminants. The water is heated to the point of evaporation and released as steam while everything else is left behind as a super-concentrated brine that can either be disposed of or used to plug wells at the end of their life.

Working with an oil major in the Permian Basin’s Ector County, Gradiant wrapped up a six-month test of the evaporation technology in December in which the CGC technology was able to process up to 2,000 barrels, or 84,000 gallons, of wastewater per day.

Still working on landing long-term customers, Gradiant is marketing the evaporation technology as ideal for exploration and production companies operating in remote areas where trucking, pipeline and disposal costs are high. Evaporation, Jimenez said, lowers costs for operators by reducing the volume of wastewater that needs to be trucked or pipelined and, more importantly, disposed of.

“A year and a half ago, 50 to 60 percent of our client conversations were about recycling water,” Jimenez said. “Now it’s more about disposal. The amount of produced water is far exceeding the capacity available to dispose it. As such, everyone is evaluating alternative solutions to water disposal wells.”

‘Water field with oil in it’

A shallow sea millions of years ago, the Permian Basin of West Texas and southeastern New Mexico is the nation’s largest and most active oil field today. But with prehistoric saltwater trapped and concentrated inside the region’s geological formations, Permian wells are producing more wastewater than crude oil.

Beginning this month, the Permian Basin is expected to start producing more than 4.8 million barrels of crude oil per day, according to the U.S. Energy Department. Gradiant Energy Services estimates that the region produces about 15 million barrels of wastewater per day — roughly 630 million gallons — enough to fill more than 950 Olympic-sized swimming pools.

“The Permian Basin is essentially a water field with oil in it,” Jimenez said. “Depending on where you’re drilling, you can find high water to oil ratios, even four to 10 barrels of water for each barrel of oil.”

Fuel Fix: Get energy news sent directly to your inbox

Founded in 2016, Gradiant Energy Services has spent the last four years focusing on recycling oil field wastewater in the Permian Basin and Marcellus Shale of Pennsylvania.

The company’s story begins when Jimenez was working on his MBA at the Massachusetts Institute of Technology in 2012 where he met the team at Gradiant Corp, a Boston based MIT spin-off for water purification and desalination. They tapped Jimenez to head up Gradiant Energy Services, the company’s oil and natural gas industry arm.

Looking to expand and land more contracts with operators, the company has more than a dozen employees in Houston.

Over the past seven years, Gradiant Energy Services has gone after companies that can save money by treating water onsite rather than paying to transport and dispose of it.

While trucking, pipeline and disposal options for oil field wastewater can range from 35 cents to $1 per barrel in the eastern region of the Permian Basin known as the Midland Basin, Jimenez said those costs can be as high as $1.80 to $2.50 per barrel in the remote western end, which is known as the Delaware Basin.

Dozens of new disposal wells are being added, but with increased traffic at the ones already in operation, they are being blamed for the increase of man-made earthquakes in the Permian Basin, particularly in a 50-mile corridor between Fort Stockton and Pecos.

Jimenez said recycling and evaporation are competitive on price with disposal and, because they greatly reduce the need to inject wastewater deep underground.

“The scope of these problems can be intimidating,” Jimenez said. “The water market in the Permian is driven by the overwhelming amount of produced water and completion jobs that require large volumes of water. All of this is taking place in areas where water is scarce, which brings an added component of complexity in terms of logistics and how to economically handle all those volumes — while making the whole effort sustainable.”

Gradiant Energy Services and its niche in evaporation is not the only player in the oil field water recycling industry. At least a dozen water recycling companies operate in the Permian Basin, according to Houston research firm Simmons Energy.

Breakwater Energy Partners, another Houston company, has emerged as a competitor in the water recycling market. It buys and moves fresh water to drilling and hydraulic fracturing sites and also recycles around 7 million gallons of produced water per day.

More: Read the latest oil and gas news from HoustonChronicle.com

Herb Chambers, CEO of the Houston oil field water pipeline operator EVX Midstream, said there is no single “silver bullet” to handle wastewater from the industry. As the largest pipeline-gathering system for oil field wastewater in the Eagle Ford Shale of South Texas, EVX has tested several water recycling technologies.

“We’re fortunate that our contracts afford us the opportunity to either dispose of water or use other technology,” he said.

For the moment, he said the business model of using pipelines, trucks and disposal wells remains the most cost-effective choice for most of the company’s customers.

“To disrupt and industry that is moving full stream ahead would be hard to do but that doesn’t mean it can’t be done,” Chambers said.

Although divided on issue of oilfield wastewater recycling, environmentalists agree on being skeptical about evaporation technology.

The Austin office of the Washington-based advocacy group Environmental Defense Fund, or EDF, supported the passage of bills last year to boost the adoption of oil field wastewater recycling in Texas and New Mexico.

Describing oil field wastewater as a complex mixture of ancient saltwater, oil, natural gas, chemicals and other compounds with different boiling points, Dan Mueller with the EDF’s office in Austin said the organization is concerned about environmental contaminants being released along with the stream from the evaporators. Oil field wastewater, he said, varies from site to site and requires different techniques to remove different types of pollutants.

“The questions to be asked and answered are what constituents are present, at what concentrations, and what will be their fate in the released steam,” Mueller said.

Citing an April 2018 report from the Pennsylvania Department of Environmental Protection and a January 2018 report from the Oklahoma Water Resources Board, Earthworks Research and Policy Analyst Melissa Troutman said oil field wastewater evaporation technology has been documented as releasing benzene, cadmium, formaldehyde, hexane, toluene, lead and other hazardous air pollutants.

Earthworks, she said, is also concerned about how the technology handles radium, a cancer-causing and radioactive element that is known to attach to salts in oil field wastewater.

Calling the concerns raised by environmentalists valid, Jimenez said the company’s evaporation technology is safe and removes pollutants from the water before it is evaporated. The company, he said, tests water for radioactivity prior to processing and handles the leftover brine accordingly.

“If there is any radioactive material, it stays in the heavy brine as part of the solids, which would be treated as any other radioactive waste,” he said.

20 Technology Metatrends That Will Define the Next Decade – Singularity Hub

Will Carling: How technology is changing our experience of rugby – Broadcast