Hurdles the continent has to overcome

Africa, as a whole, is still relatively new to established technology infrastructure. Mainly, due to the multitude of dictatorships in various African countries like Sudan, Zimbabwe, Chad, and others, internet shutdowns are common. This makes predicting investment return for companies quite hard.

The continent also lacks competition in the data space, meaning that the prices of data are significantly higher than in other regions of the world. 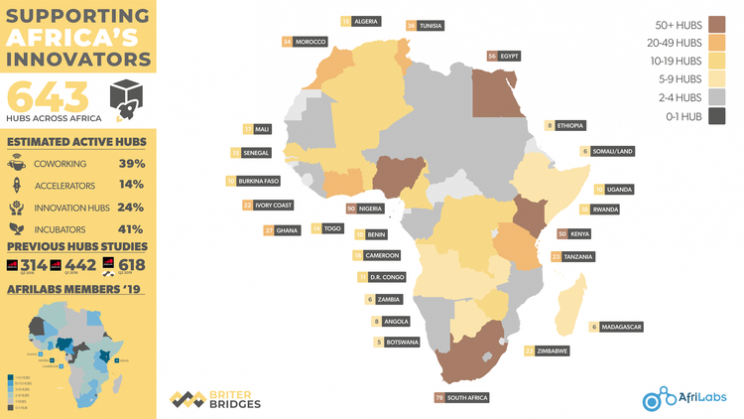 The continent is also another half a decade away from having a 4G connection, meaning that wireless data speeds will remain much slower for the time being. However, companies aren’t sitting idly by. Google and Facebook are trying to boost connectivity in the various countries on the continent by surrounding it with high-speed fiber-optic cables.

So how is all of this connectivity impacting technology business growth?

The tech business in Africa

Currently, there are 643 tech hubs across the continent, with the largest groupings being in Nigeria, Egypt, Kenya, and South Africa. There’s still a lot more room to grow.

41% of the “tech hubs” are incubator facilities, 24% are innovation hubs, and 14% are accelerators, according to Forbes.

The biggest hurdles that countries have across the continent are largely what we’ve already discussed, overcoming the technology and data infrastructure that is currently in its infancy. However, having technology hubs across the continent that serve as places to co-work and facilitate innovation. These provide locations for startups to grow and expand on a continent with a lot of intellectual potential.

Why tech is growing in Africa

1.2 billion people live in Africa, and for the large part, the talent there has been underutilized from a global perspective. Previously this was largely due to geography – Africa is quite far away from the rest of the world, and transportation infrastructure is not well established.

However, with modern technology allowing anyone to work anywhere, improving connectivity in the region is making it easier than ever for companies to risk expanding into new African countries.

For tech specifically, investing in growing socio-economic regions is always beneficial. For companies like Google and Facebook, getting in on the ground floor of the entire continent’s technological underpinnings could present a massive win. It’s no wonder too when the continent represents 1/7th of the entire global population.

Leveraging Technology to Create an Inclusive and Equitable Workplace - ATD